7 Principles from “The Design of Everyday Things” 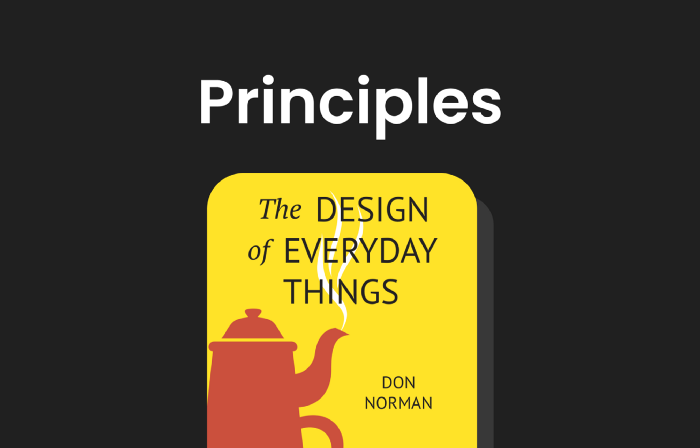 The Design of Everyday Things by Don Norman is the seminal book on UX design. No matter a designer’s level of experience, this book offers invaluable lessons. More than anything else, the book serves as a foundational perspective on what design is, what it does, and why good design is vital.

It was written by designer Don Norman and published in 1988. Norman eventually went on to found the Nielsen Norman Group (NN/g) with designer Jakob Nielsen in 1998. The NN/g is considered the leading UX design consulting firm in the world. The ability to bring that kind of wisdom and knowledge to his consulting firm speaks volumes about the design expertise of Norman, and most of that expertise can be discovered in The Design of Everyday Things.

The following seven principles serve as the basis of UX design:

2. Simplify the structure of tasks.

Automation, as in the automation of automobiles, makes life easier, but too much automation can alienate users.

Norman suggests this is possible by reducing the cognitive load of users through technology. He outlines four ways technology can be used here:

Designers should make things visible on the execution side so that users know what to do and how to do it. Designers should also make things visible on the evaluation side so that people can tell the effects of their actions. In other words, as Norman puts it, “[a] system should provide actions that match intentions.” Norman provides lots of examples of this, but the best is a friend of his who bought a new CD player and couldn’t get the remote to work as he was aiming it in the wrong direction. A little metal loop on the end was confusing him. When he turned the remote around, he was able to use it perfectly. The metal loop’s actions did not match the promise of its intentions.

4. Get the mappings right.

A push door should not only look like a push door. It should behave like it looks.

“Difficulties arise,” according to Norman, “wherever the positioning and movements of the controls deviate from strict proximity, mimicry, or analogy to the things being controlled.” In simpler terms, this means that if a door says push, but it looks like a pull, the mapping between intention and possible action is off. A correctly mapped door looks like a pull door because it is one.

5. Exploit the power of constraints.

Norman sums this up well. “Use constraints so that the user feels as if there is only one possible thing to do — the right thing, of course.” Constraints work by reducing alternatives for users. A well-constructed system will present users as few alternatives as possible at each step.

Humans make mistakes. Plan for it.

“Assume that any error,” declares Norman, “that can be made will be made. Plan for it.” In fact, human error is such a big part of all designs systems that the more important lesson to be drawn from this principle is not that humans make mistakes, but that designs should always offer them an escape route from their mistakes. Designers can plan for human error by giving them options to reverse it or fix it when it inevitably occurs.

7. When all else fails, standardize.

The above seven principles are a great start to understanding what good UX design is and how it works. Every designer can learn from a deep dive into The Design of Everyday Things to read more about these principles. Take a look at the world around you, not just the world of UX, to see how these principles continue to make an impact.