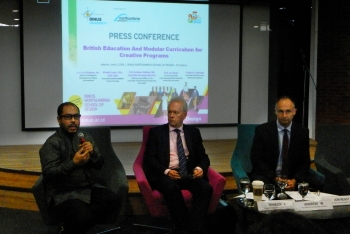 BINUS Northumbria School of Design (BNSD) on 2nd June 2016 announced the formal implementation of its latest strategy to continue to improve upon the quality of courses and programmes offered at the school; namely, the introduction of a British Modular Curriculum to be carried out in cooperation with Northumbria University as its longstanding partner from the United Kingdom. During a press conference held at BINUS’ FX Sudirman campus in Central Jakarta, Mr Minaldi Loeis, Ms.C, MBA as Dean of BNSD discussed at length the school’s plans to emulate the type of curriculum structure that has proven to be immensely successful in fostering a highly-conducive academic environment across universities in Europe. Mr Loeis was joined in presenting this new vision for BNSD by Prof. Andrew Wathey as Vice Chancellor and Chief Executive of Northumbria University and Prof. Jon Reast as its Pro Vice Chancellor of International Development.

The implementation of a British Modular Curriculum at BNSD will necessitate significant changes to its current course structure, in which the school will move away from the requirement that students complete 6-8 courses per semester (as is typically the case in Indonesian universities) and will instead encourage them to take 4-5 courses per semester that are more intensive and extensive in their coverage of the subject matter. To facilitate this curriculum transformation, BNSD intends to integrate multiple subjects that were each previously taught as stand alone courses into a single course offering greater depth and broader insights. In striving to redesign its programmes to become more outcome-based, the school will also introduce competency-based assessments to ensure that its students are best prepared for the rigours of their prospective career paths.

As an institution of higher education in which the British Modular Curriculum has been used to great effect, Northumbria University will provide guidance to BNSD throughout the process. The Newcastle-based university will specifically be involved in the introduction of innovative learning methods that will prepare students for the challenges to be faced by businesses and industry leaders in the future. In speaking at the press conference, Prof. Wathey reiterated his institution’s plans to further its presence in the Indonesian market and commended BNSD for the school’s ambitiousness in pursuing new methods to improve upon the quality of education offered.

Going forward, BNSD’s success in implementing the new British Modular Curriculum will serve as a vital learning experience for BINUS INTERNATIONAL, as it aims to integrate a similar course structure across all of its faculties and schools in the near future.