Undoubtedly, Indonesia owns rich arts and cultures from Sabang to Merauke – the ancestral cultures that were passed down from generation to generation. However, the students from the Fashion Program of BINUS Northumbria School of Design (BNSD) have tried to transform the cultures that are identical to oldness and antiqueness into a contemporary form through a ready-to-wear fashion collection in the Jakarta Fashion Week 2019.

With the theme “The Untold Story; Lasem Revealed”, this year is the seventh participation of BNSD in the Jakarta Fashion Week. And as usual, BNSD consistently promotes local cultures in the biggest and most prestigious fashion event in Indonesia.

Held on Tuesday, 23 October 2018, at the Fashion Tent Jakarta Fashion Week 2019, twelve selected students got an opportunity to showcase their ready-to-wear fashion collections that were inspired by the batik motif from Lasem, Central Java.

Lasem, a district located in Rembang Regency, Central Java, Indonesia, has a quite unique and different story compared to many regions in Java. Lasem is a town where the Chinese first arrived in Java, and thanks to the many Chinese settlements here since long ago, Lasem is known as “Little China”.

The assimilation and acculturation of many contrasting differences in Lasem has resulted in a new and unique cultural element, including the batik. “Lasem’s batik took many inspirations from the Chinese culture, such as the dragon motif and Chinese flowers,” said Ratna Dewi Paramita, the Head of the Fashion Program at BNSD.

Ratna explained that BNSD chose to showcase Lasem in the fashion collections for the Jakarta Fashion Week 2019 because of the uniqueness of the batik, compared to the ones from other regions. Other than that, she added, Lasem also has many stories that can be embedded into a fashion collection.

The six brands that were presented by the twelve students in the Jakarta Fashion Week 2019 are:

The name Arka is taken from Javanese culture, representing the hope of being a fluorescent light. The logo is taken from the traditional Chinese vocabulary which reads Hūshì, meaning overlooked or to fail to notice or consider, deliberately or indulgently, and the blurred paint in the background embodies the fading of the cultures in our nation. The context of both the name and the logo conveys the standing ground of both designers, which is to enlighten the overlooked details and to empower the forgotten cultures. The combination of Javanese and Chinese terminology is used to represent the respect for diversity.

This collection revolves around the beautiful city of Lasem with its acculturation between the Javanese and Chinese influences, also highlighting the batik with the distinguished red color, and the harmony, respect, and love for their heritage shared among the local community.

OEMNJA stands for “Oemah Njonja”, which is a Javanese term for “The Home of a Lady”. The brand is about accentuating the history of Lasem, as a tribute to all the women that have lived their lives oppressed and those that have been through a tough journey. OEMNJA wants to create awareness for the hidden beauties of the village of Lasem, and the unseen aspects that should be much more appreciated and acknowledged.

The first collection of OEMNJA features feminine silhouettes, beautiful colors, and yet all of that is paired with a playful twist.

The name of the brand, Vod, is a Dutch word meaning shred or patch. This brand is intended to collect all the remaining pieces of Indonesia’s heritage to learn about it from the roots all over again and then develop it to create a collection with a rich cultural affection. The first collection of this brand is inspired by a forgotten sub-district in Central Java called Lasem, focusing on its history about their architecture and opium lifestyle.

Hanyutan is a brand inspired by the human ego that has the ability to create a clash between cultures. Hanyutan comes from the word ‘hanyut’. The word itself has several meanings, one of which is: ‘terbawa oleh arus’. The stream of the human ego is sometimes so powerful that it is able to create a wave of hatred shattering everything around it.

The aim of this collection is to promote the idea of peace and the freedom of expression through the influence of punk culture. The purpose is to show that we can inherit and adapt both cultures without war, violence, or discrimination.

The name Allawn comes from the Arabic language, which means color. Therefore, our brand shows playful vibes through three colorful clothes with a twist of embroidery and screen printing. Allawn also provides modest wear in every chance and season.

Allawn is inspired by the acculturation of Chinese and Islamic developments in Lasem. This brand collection combines modest wear with Chinese silhouettes through the brand’s characteristics; playful and colorful. In this season, our embroidery and scarfs are also inspired by Lasem city.

RACKO aims to show that it is possible to reconstruct clothing and make it into something even better. Nowadays, denim is used in so many types of clothing and is known to look better even after being worn for several years. There are a lot of techniques that can be done to denim fabric and can also be used to make patches. Through this fashion collection, the designers want to prove that even the littlest things can become a part of something big.

Ratna hopes that these fashion collections can be appreciated by the public and also remind the young generation of the beauty of the acculturation in Lasem. 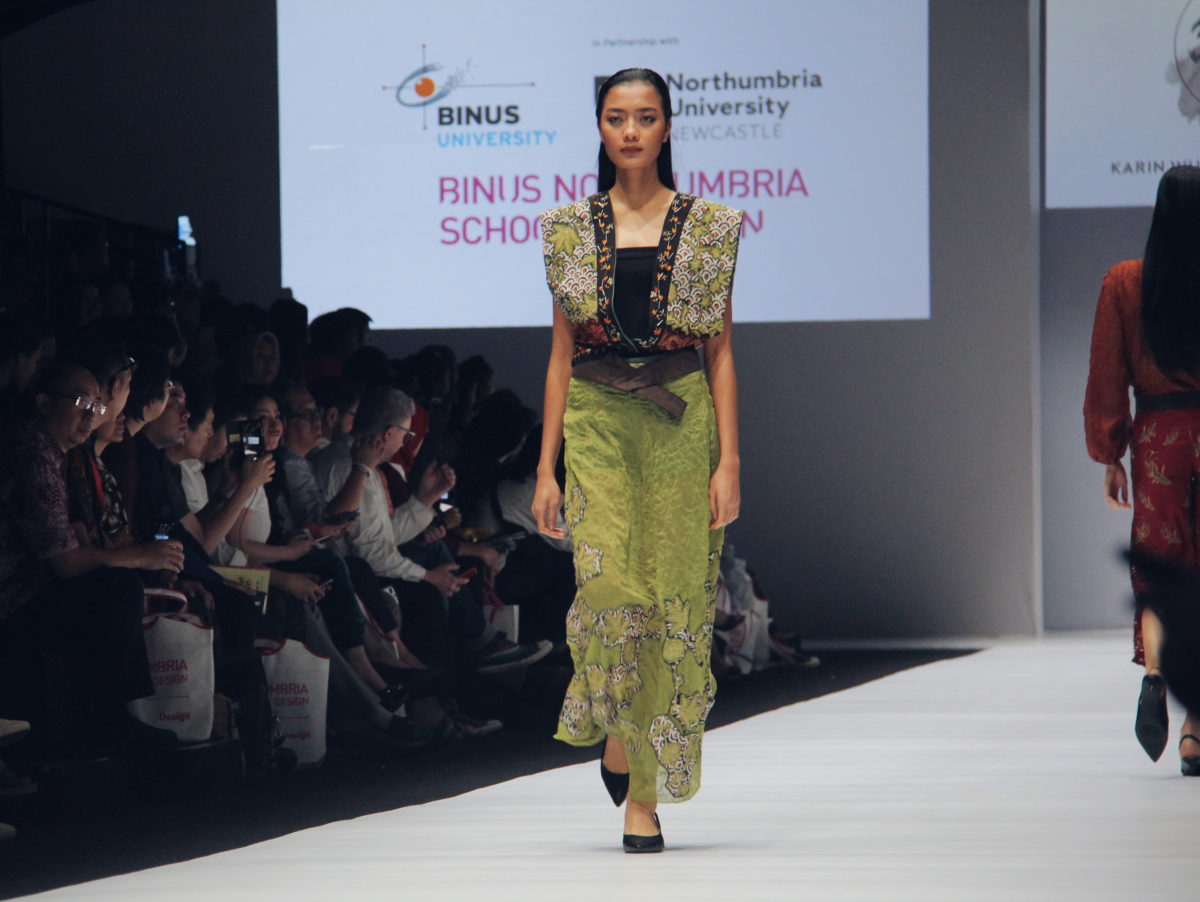 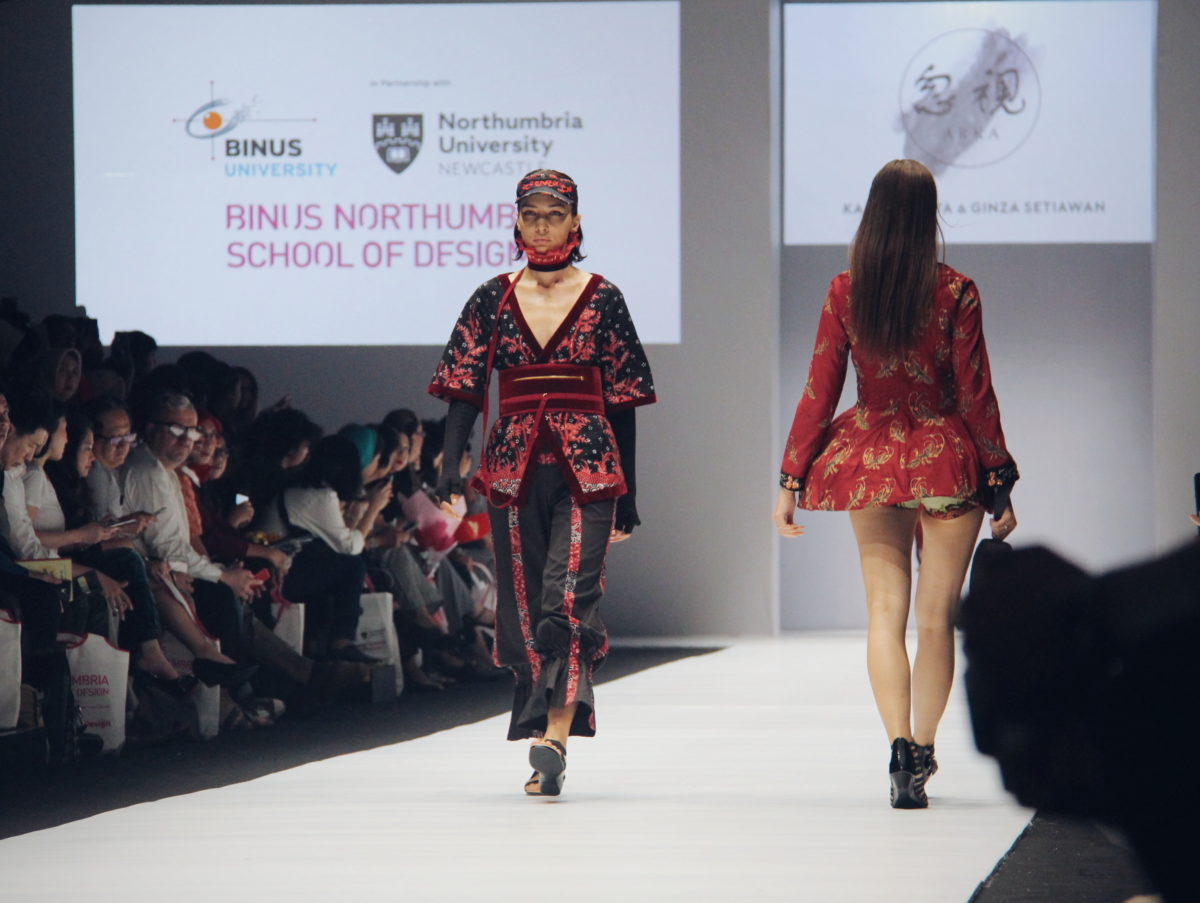 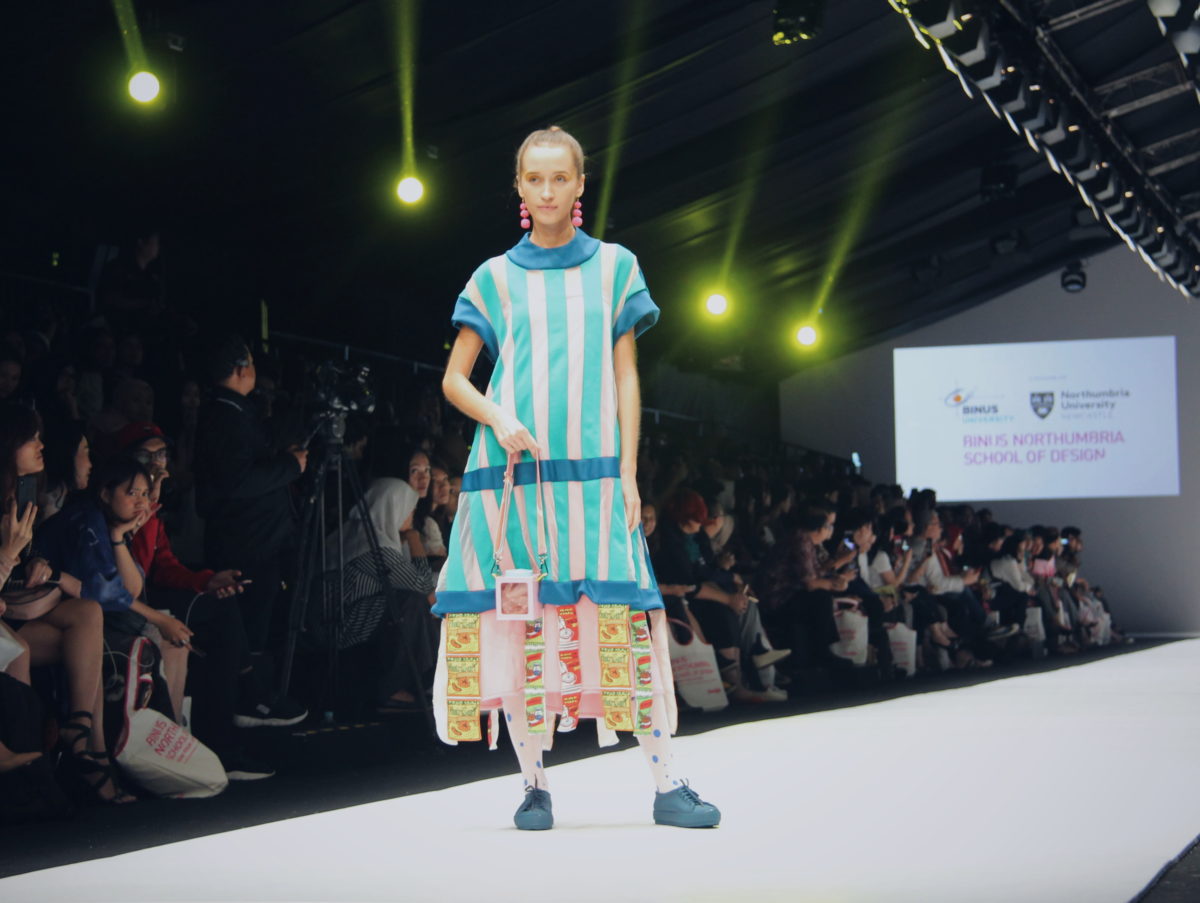 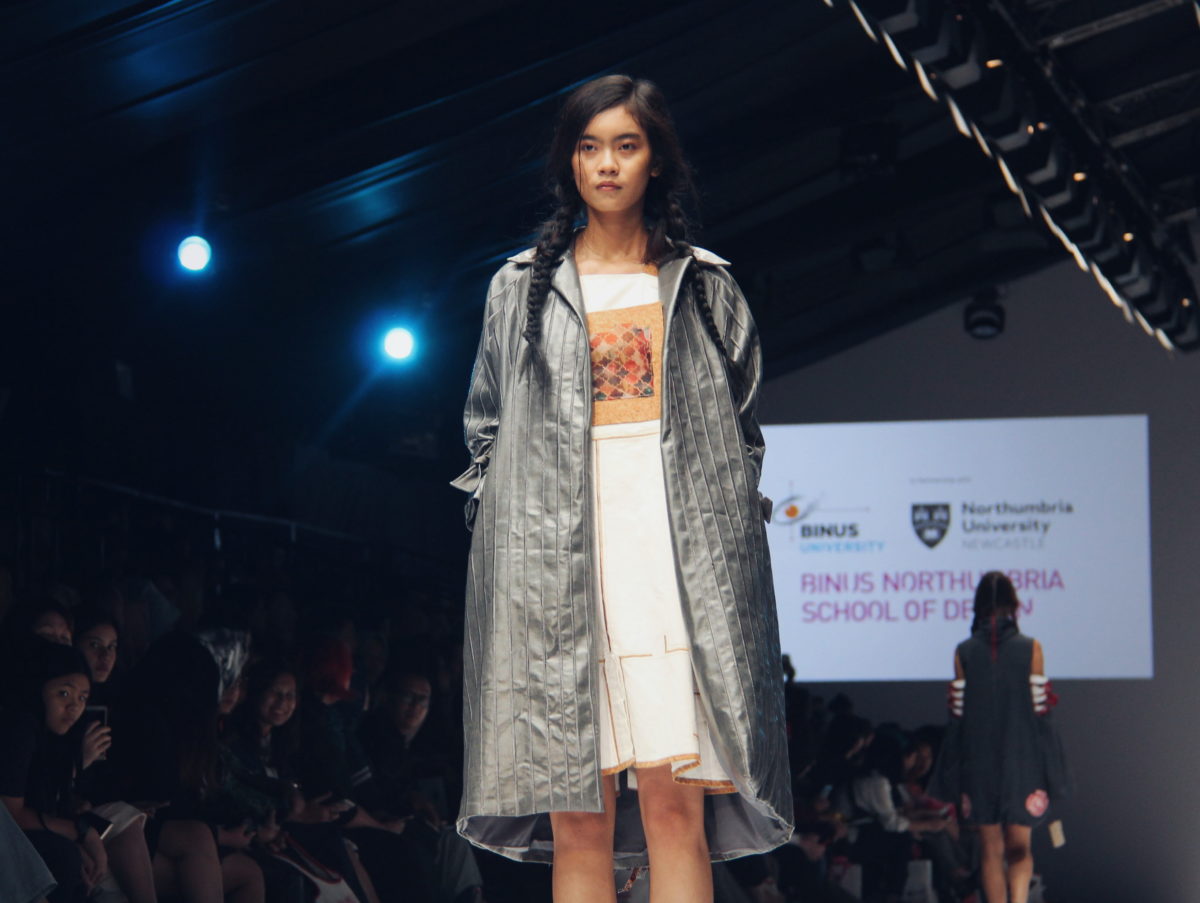 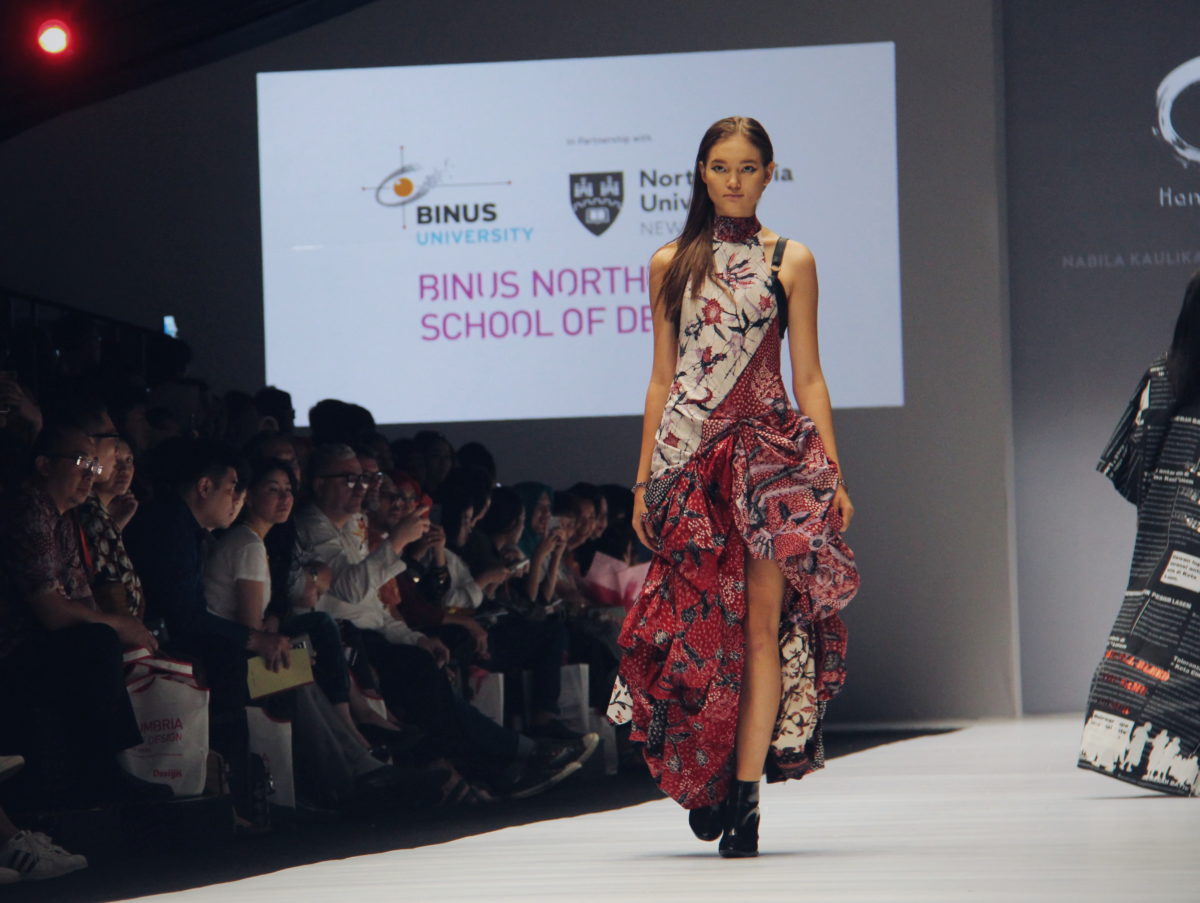 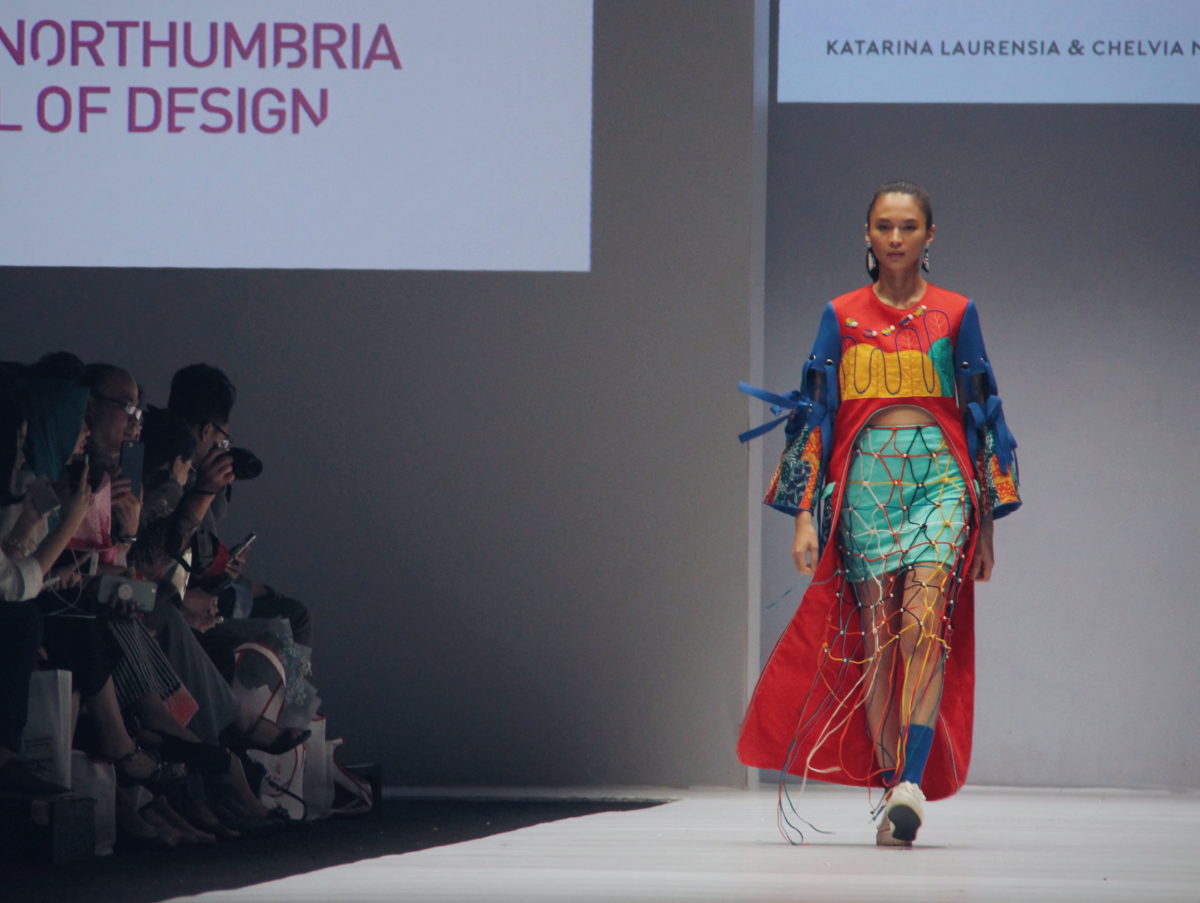 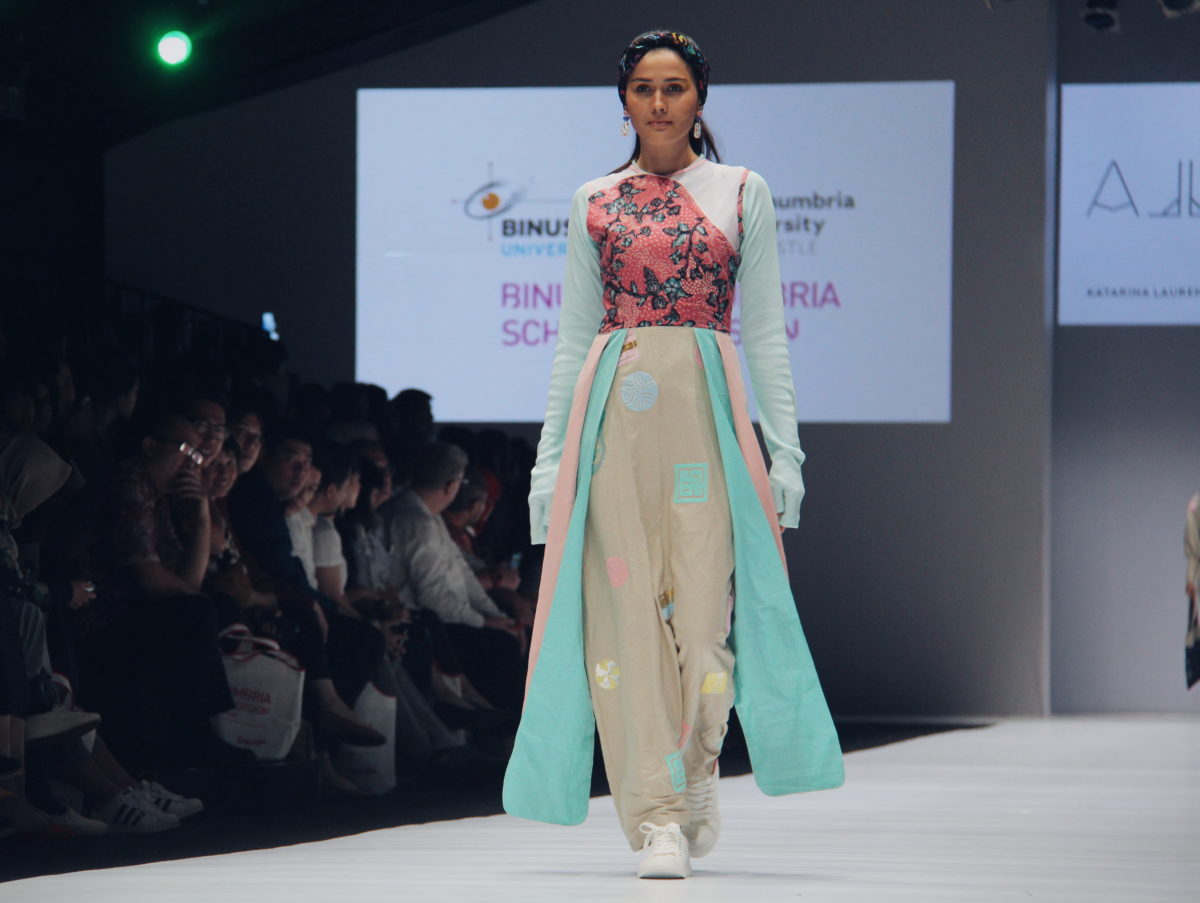 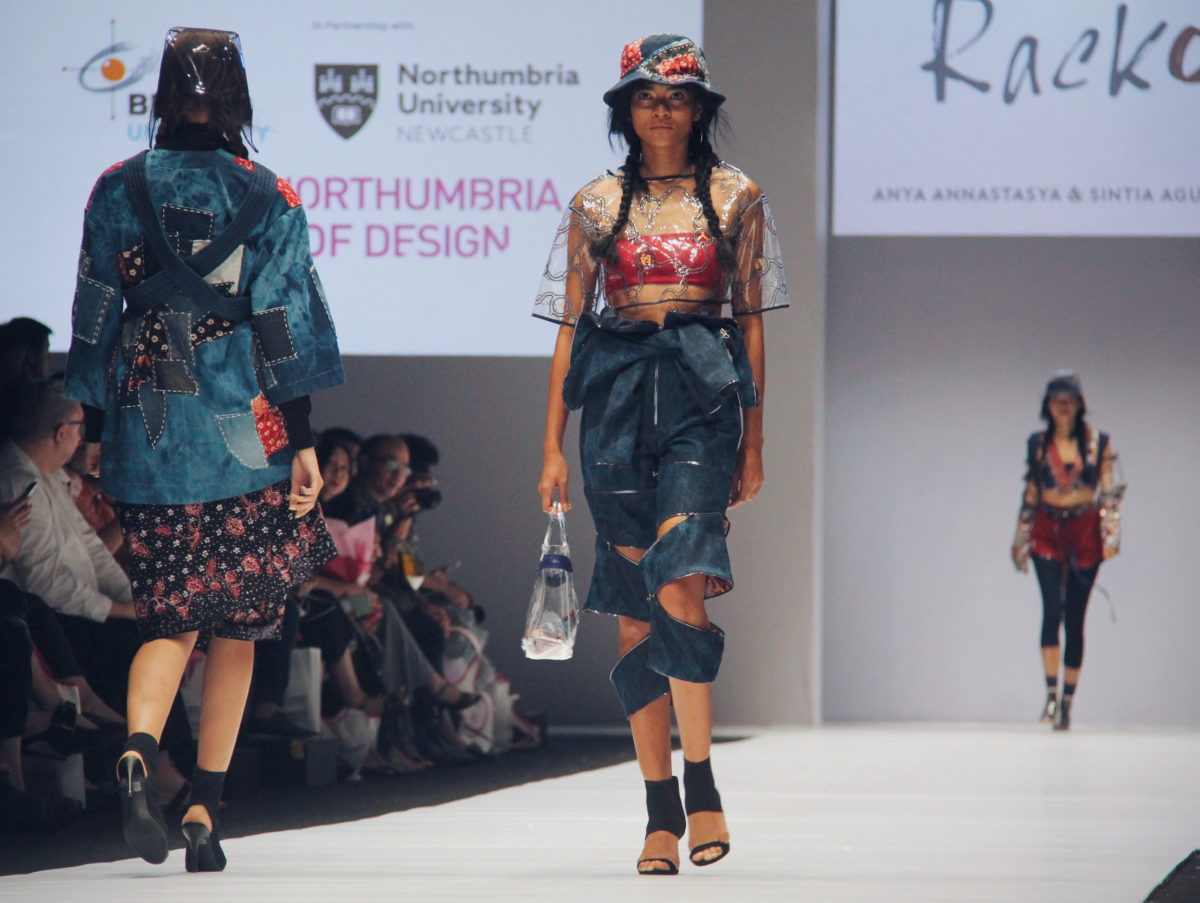 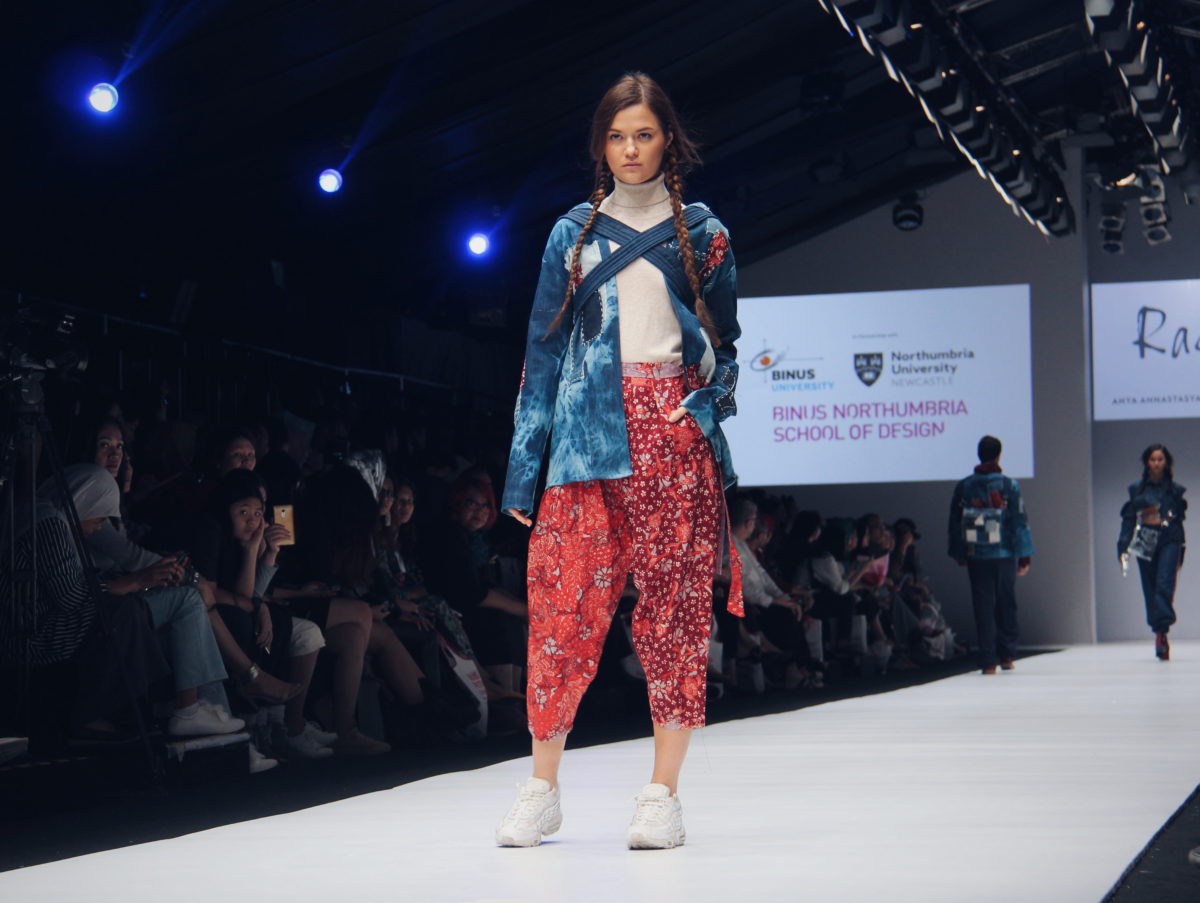 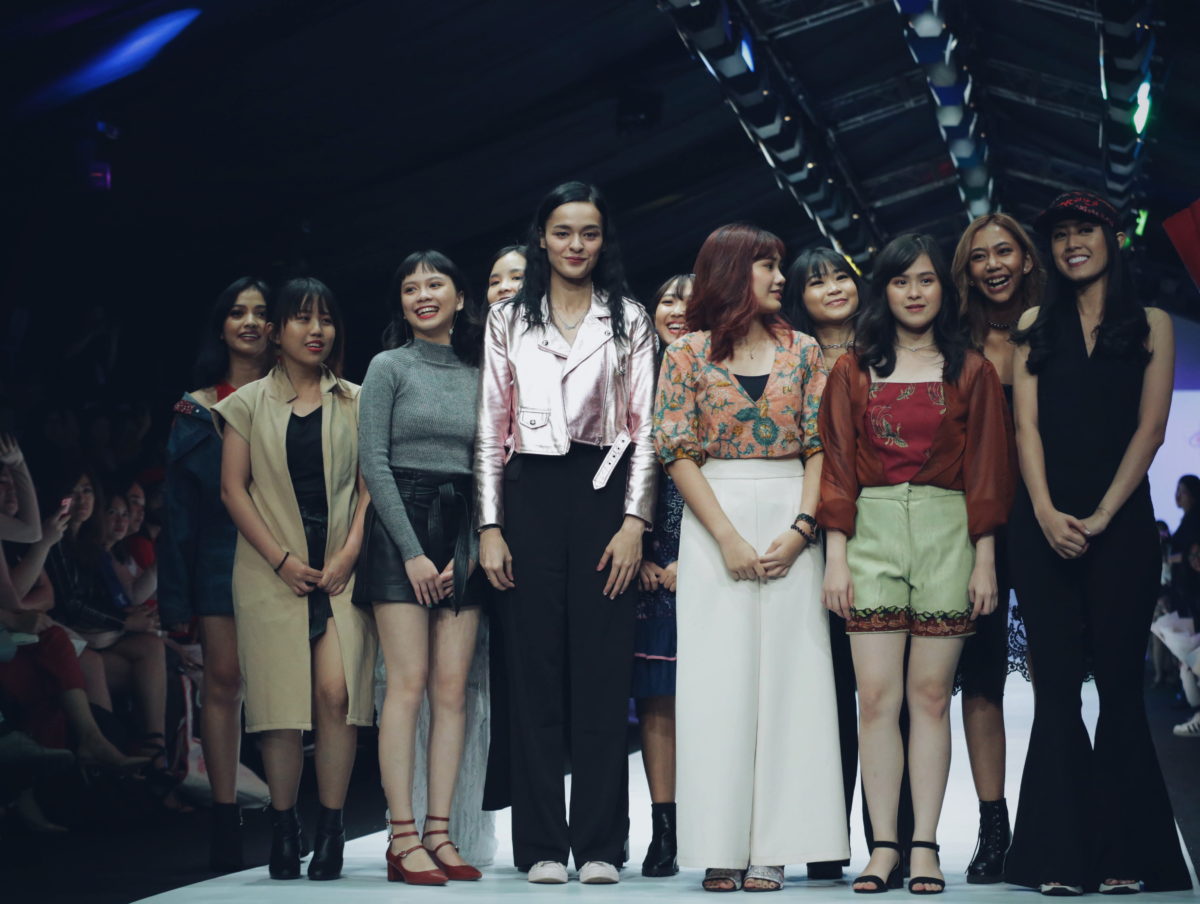 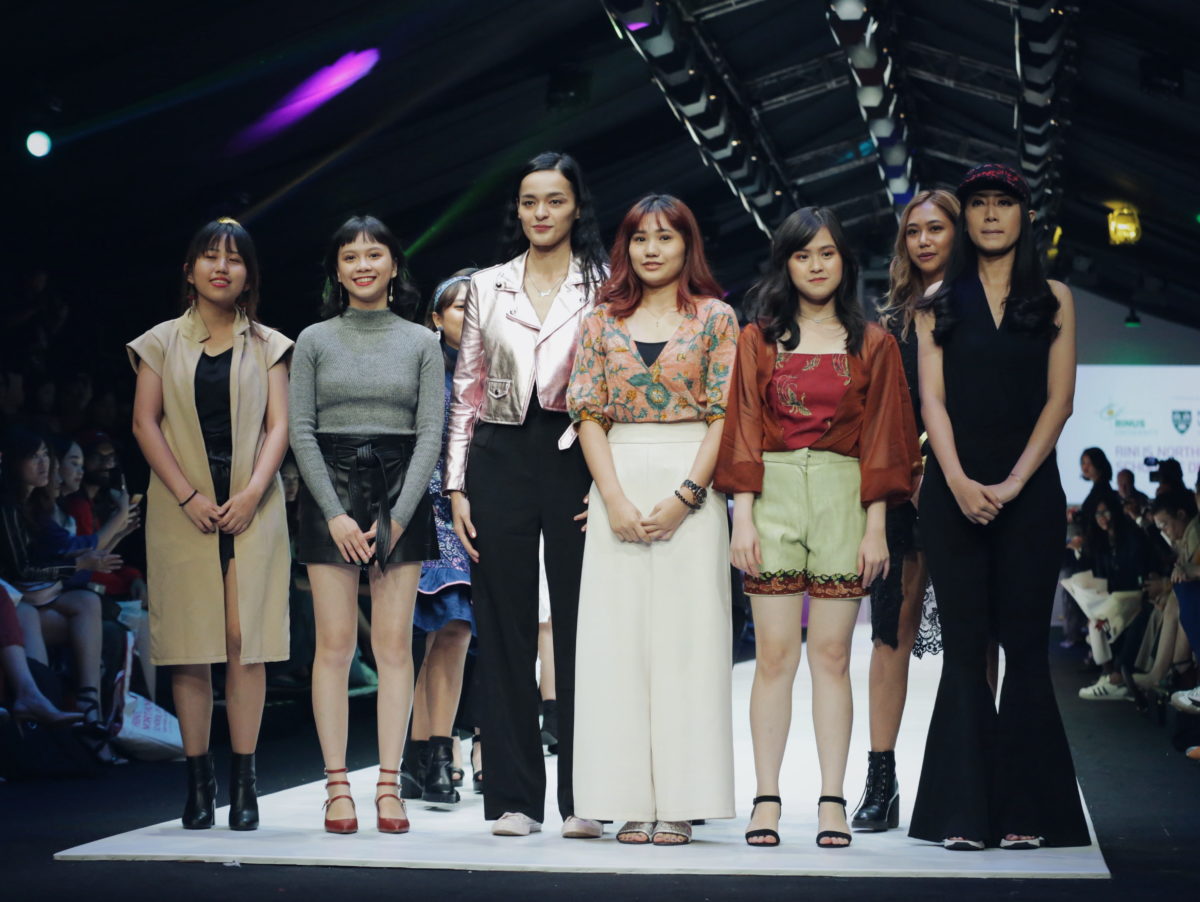